In Celebration of Mary McLeod Bethune

These are words from the last will and testament of Mary McLeod Bethune, a historically famous educator, entrepreneur, philanthropist, humanitarian and civil rights activist. This year, I wanted to celebrate Black History Month by highlighting someone special in America’s past…someone who embodied Femworking’s tenets and made an impact in her community.  And when a friend suggested Mary McLeod Bethune, I couldn’t wait to learn more about her.

And as I read about Mary, I couldn’t help but feel like kindred spirits with her. From the way she enjoyed learning “gems” from her students to her passion for educating girls as a way to help improve their conditions, I feel like we’re connected, despite the decades between our lives and our backgrounds. If you’ve never heard of her before, please allow me to introduce you to this amazing woman.

Born to former slaves in 1875 and beginning to work in the fields herself at age 5, Mary McLeod Bethune quickly gained an interest in education. The only person in her family to attend school, she walked five miles each day to get to the one-room schoolhouse and back. Her teacher Emma Jame Wilson took a special interest in her and helped her get a scholarship to attend college. After she graduated she began teaching at a school founded and run by Lucy Craft Laney.

Laney was also born to former slaves, and when Bethune reflected on the year she spent teaching at Laney’s school, she said, “I was so impressed with her fearlessness, her amazing touch in every respect, an energy that seemed inexhaustible and her mighty power to command respect and admiration from her students and all who knew her. She handled her domain with the art of a master.”

That quote is so relatable to us as female entrepreneurs. That we are also fearless, that we also exude an inexhaustible energy, and that we at least attempt to “handle our domains with the art of a master.” We work at our crafts relentlessly, honing them and constantly improving ourselves.

I love that Bethune noticed this about her colleague, and that her comments about her colleague were so glowing, so admiring, so positive. It reminds me of the positivity and sisterhood we strive for here at Femworking, a philosophy so core to our values we teach it to all new members upon joining.

Bethune adopted Laney’s emphasis on educating girls and women to improve the conditions of black people, saying “I believe that the greatest hope for the development of my race lies in training our women thoroughly and practically.” I couldn’t agree more – it’s well documented that educating girls and women improves the conditions for her, her family, her community, and the world. This is another core value where I feel like Ms. Bethune and I are connected. I’m so glad that she followed her calling and worked tirelessly to develop women. 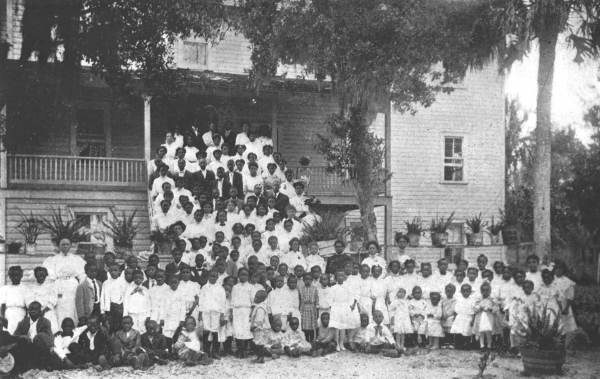 Students at the Literary and Industrial Training School for Negro Girls, circa 1919

In October 1904, Bethune rented a small house for $11.00 a month. She made the benches and desks herself from discarded crates, and used $1.50 to start the Literary and Industrial Training School for Negro Girls. She had six students when she started: five girls and her son Albert. The school was supported by the local community, as well as Bethune’s entrepreneurial spirit, and she was teaching more than 30 girls at the school just one year later. 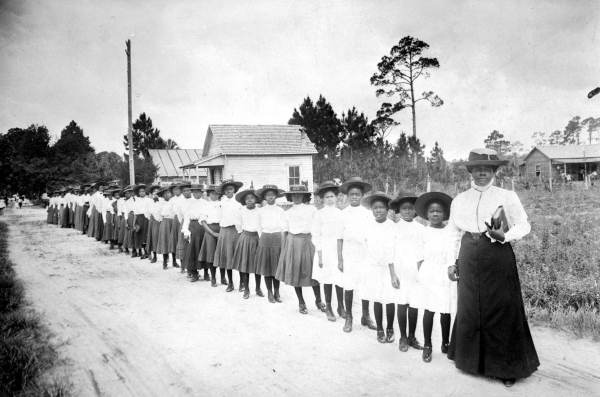 Mary McLeod Bethune with girls from her school. Circa 1905.

The classes emphasized a life of self-sufficiency for her students, focusing on them as females. Later Bethune added science and business courses,
along with high school-level courses of math, English, and foreign languages. The school later merged with the all-boys school, Cookman Institute, and became the Bethune-Cookman College, a coed junior college. She served as president of the college from 1923 to 1942, and again 1946 to 1947. She was one of the few women in the world to serve as a college president at that time.

Bethune was a civil rights champion and held several notable positions that advanced the position of black women. She served in the National Association for Colored Women (NACW) from 1917 to 1925, as the Florida chapter president. Here she worked to register black voters despite constant threats by the KKK. In 1924, she was elected as national president of the NACW, leading it to be the first black-controlled organization with its headquarters in Washington, DC.

The Southeastern Federation of Colored Women’s Clubs, which focused on outreach to southern white women for support and unity, elected Bethune as president after its first conference in 1920. In 1935, she founded the National Council of Negro Women, uniting representatives from 28 different organizations to work to improve the lives of black women and their communities.

Bethune was heavily involved with the National Youth Administration (NYA), a federal agency created to promote relief and employment for young people aged sixteen to twenty-five years who were not in school. She lobbied the organization for minority inclusion and eventually earned a full-time staff position in 1936. Within two years, Bethune was appointed as the Director of the Division of Negro Affairs, becoming the first African-American female division head. In this role she brought attention to the need to improve employment for black youth. In 1939, the director of the NYA said of Bethune, “No one can do what Mrs. Bethune can do.“

Bethune became a close and loyal friend of President Franklin and First Lady Eleanor Roosevelt. Mrs. Roosevelt once requested a seat next to Bethune at the Southern Conference on Human Welfare, despite local segregation laws. Through this relationship, she was able to form the Federal Council of Negro Affairs (later known as the Black Cabinet). The Cabinet was a coalition of leaders from various black organizations that served as an advisory board to the Roosevelt administration. 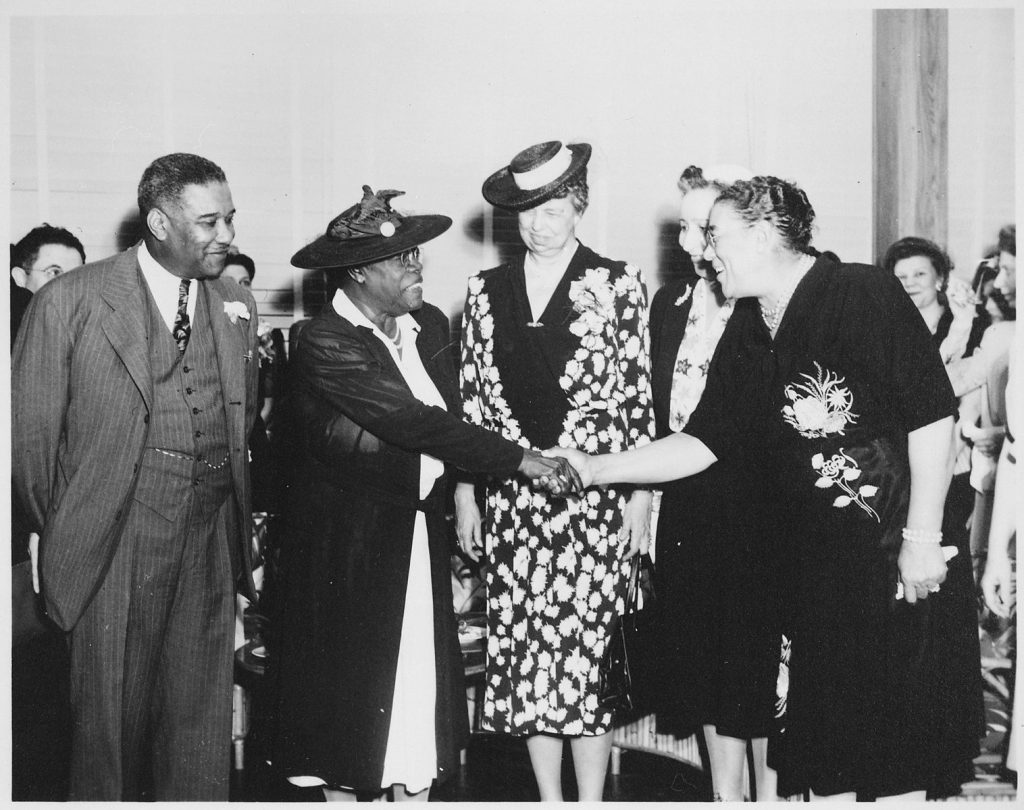 Mary McLeod Bethune, with Eleanor Roosevelt and others at the opening of Midway Hall. The Hall was one of two residence halls built by the Public Buildings Administration of FWA for Negro government girls. May 1943.

Bethune was active in the integration of the Methodist Church, and worked to educate both whites and blacks about the accomplishments and needs of black people. She said, “Not only the Negro child but children of all races should read and know of the achievements, accomplishments and deeds of the Negro. World peace and brotherhood are based on a common understanding of the contributions and cultures of all races and creeds.”

She regularly opened her school to tourists, where she would show off her student’s accomplishments. She would host speakers on black issues and take donations. (Again, the entrepreneurial spirit!) And when the U.S. Supreme Court ruled that segregation of public schools was unconstitutional in Brown v. Board of Education,  Bethune defended the decision publicly.

As you see from this abbreviated list of accomplishments above, Ms. Bethune spent her life and career working to advance the position of black people. Her focus on education has undoubtedly helped to advance the black community. Her natural entrepreneurial talents, along with her relationship-building skills, are notable and admirable. 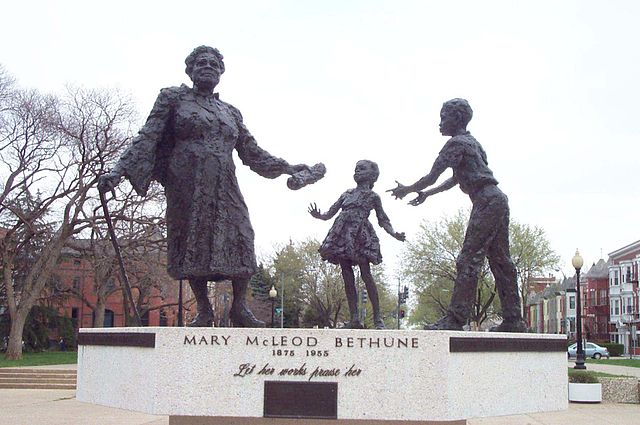 Let us all have a career and a life so impactful as Mary McLeod Bethune’s.